Request a Call Back

Find Out How I Can Help

Sign up to the Newsletter & Get Free Tips and Details of Special Offers!

I’ve been contacted today by a few parents concerned that that child was extremely anxious on the way to school this morning due to sitting their SATS.  Over the last few

weeks I’ve been working with some parents and children to alleviate the worry of SATS, this was with children who had been showing concern for quite some time. The parents who contacted me today however had no idea their child was feeling anxious until yesterday/today.  So, I’m telling you what I told them, it’s not too late!

Confidence can be built in a moment by tapping into a great memory.   What I mean by “tap into” is to take them back to an event when they feel really confident about something they’ve done.  It doesn’t have to be anything to do with school, it could for example be playing in a football match at the weekend and scoring a goal.

Watch as their whole demeanour changes.  You could really help them anchor the feeling in by doing a power pose or action while they’re thinking of the event.  They can then use the power pose or action just before each exam to remind them of the confidence they felt previously.

This process alone will be enough to give them a perfectly timed confidence boost.  However, there’s more…

Have you ever noticed how people’s eyes tend to dart around as they speak?  This is because we’re constantly accessing information relevant to what we’re talking or thinking about.  Depending on where we look depends on the type of information we access.

When our eyes dart from left to right (or right to left) they’ll be thinking of a sound they’ve heard (e.g. phone ring tone) or constructing a sound (e.g. a cow mooing jingle bells – I have no idea what made me think of that as an example!!)

If I asked you what your first kiss felt like you might look up first (to capture the memory in a picture), then you would look down to remember what the kiss felt like.

Looking down can also help up to prolong the feeling, e.g. if we’re in a really bad mood or really glum and we’re dragging our feet looking at the floor, the more intense the feeling is getting.

So, a top tip is to your child to look up.  If you’re walking into school and they’re looking down and getting stressed then get them to look up – point out houses, birds, trees, even ask them about a nice memory so they need to find the picture from their memory.  It will get them less in their feeling and more in the visual field, giving the opportunity to reduce the intensity of the feeling.

This is also a great tip to give your child for when they’re actually siting their exams too, unfortunately when we’re doing exams, due to the structure of our desks we’re actually looking down so we’re intensifying our feelings.  This is great if we’re already feeling confident but not so good if we’re feeling nervous, while we’re writing that feeling will be intensified.  It would be so much easier if we could do our exams on a while board!

So, if during their exam they feel a bit stressed, nervous or feel they can’t remember anything, suggest to your child they take a few moments to just sit back, look up and see if they can picture the book they were reading or the lesson they were sitting in when they learned the information or if they can picture the white board and the teacher writing the information on it.

On our way to school, we’ve helped our child recall a great memory and look up to recall relevant information rather than hang on to unhelpful feelings.  This next tip is on to do together at home.

If your child is regularly saying “I can’t do…” or “I’m rubbish at” or something similar you probably know from experience you saying “no you’re not” has little effect.  This is because they believe something so deeply at that moment that a placatory sentence is not going to remove a deep seated belief.  However what you can do is to help them dispute the belief themselves and the easiest way to do this is to break the problem down.

Lets say for example that your child says “I’m not going to be able to get anything right in my maths test, I’m rubbish at maths.  Ask them to tell you what types of questions there might be, for the purposes of this example I’m going to use 4 categories:  Addition, subtraction, multiplication and division.

Ask them to draw a circle on a piece of paper and divide it into 4 and label each quarter, just like this: 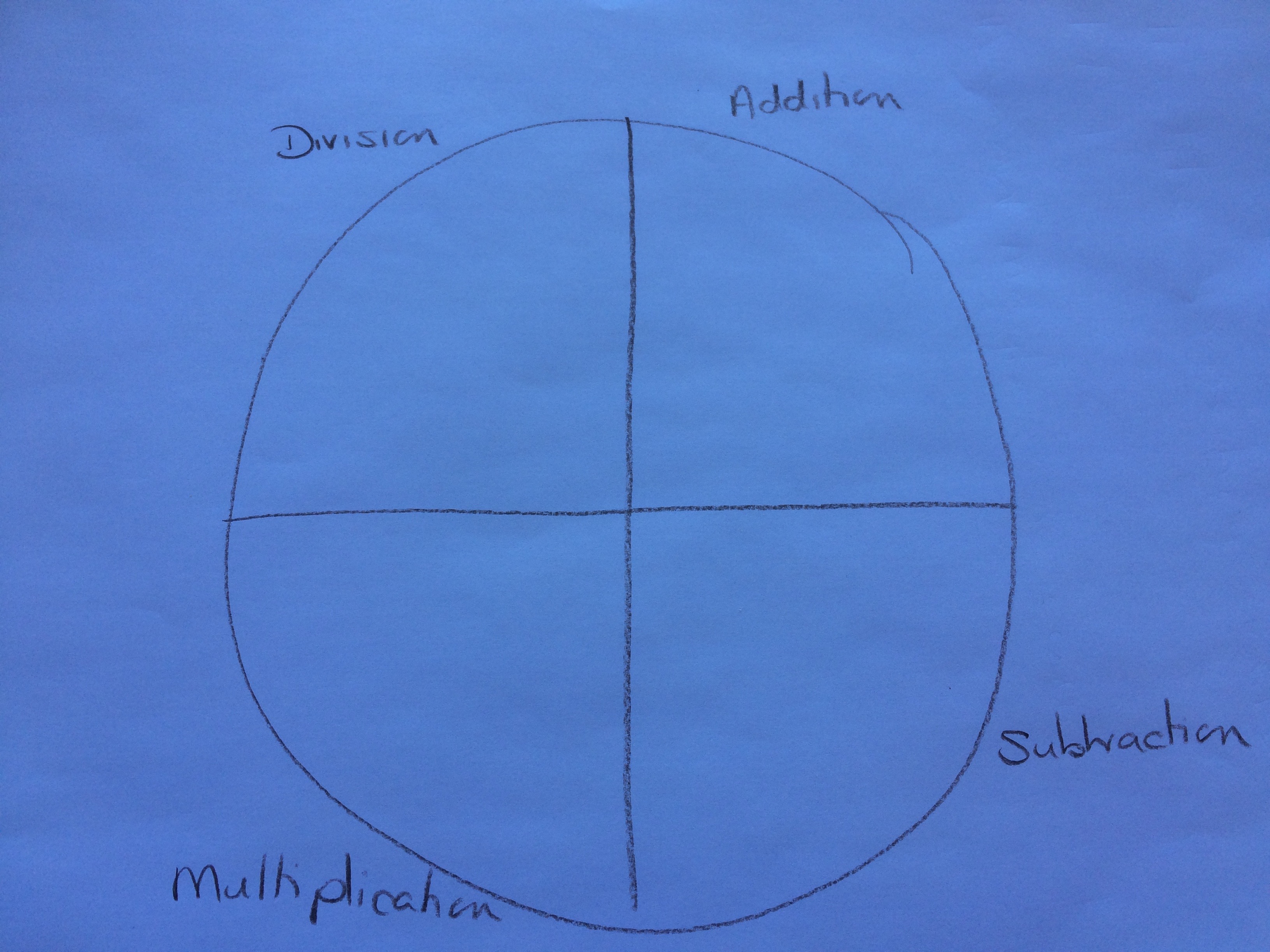 Then ask them for addition to rate how good they are from 0 – 10.  Hopefully for addition they should give themselves quite a reasonable score, lets say 9.  Ask them to draw a like across the addition cement where they think 9 is (0 being the centre and 10 being the outside edge).

Do the same for the next 3 segments.  I’m guessing the result will look something like this: 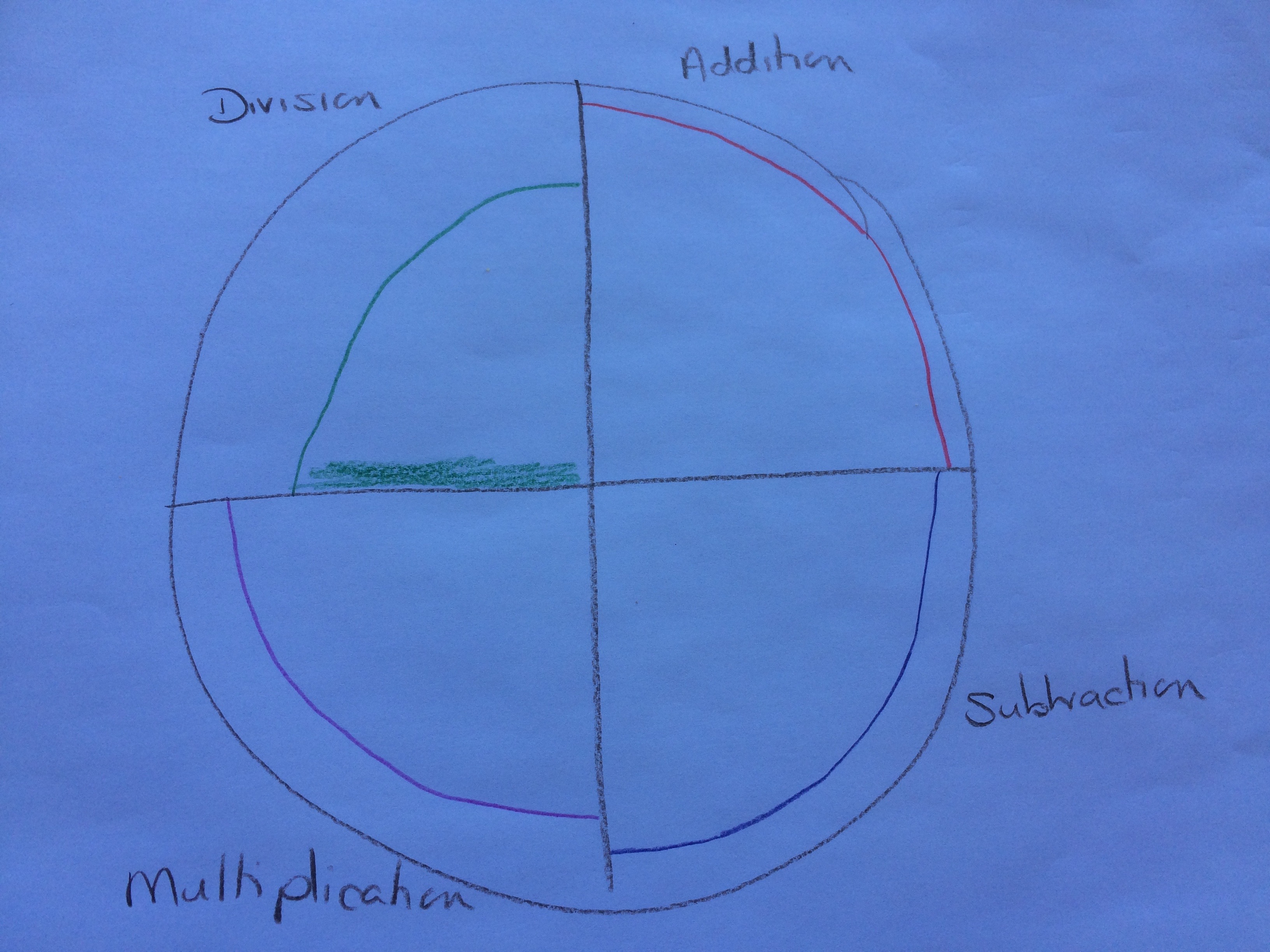 Now ask them to colour in each segment from the middle up to the line that shows how good they are.  It will now look something like this: 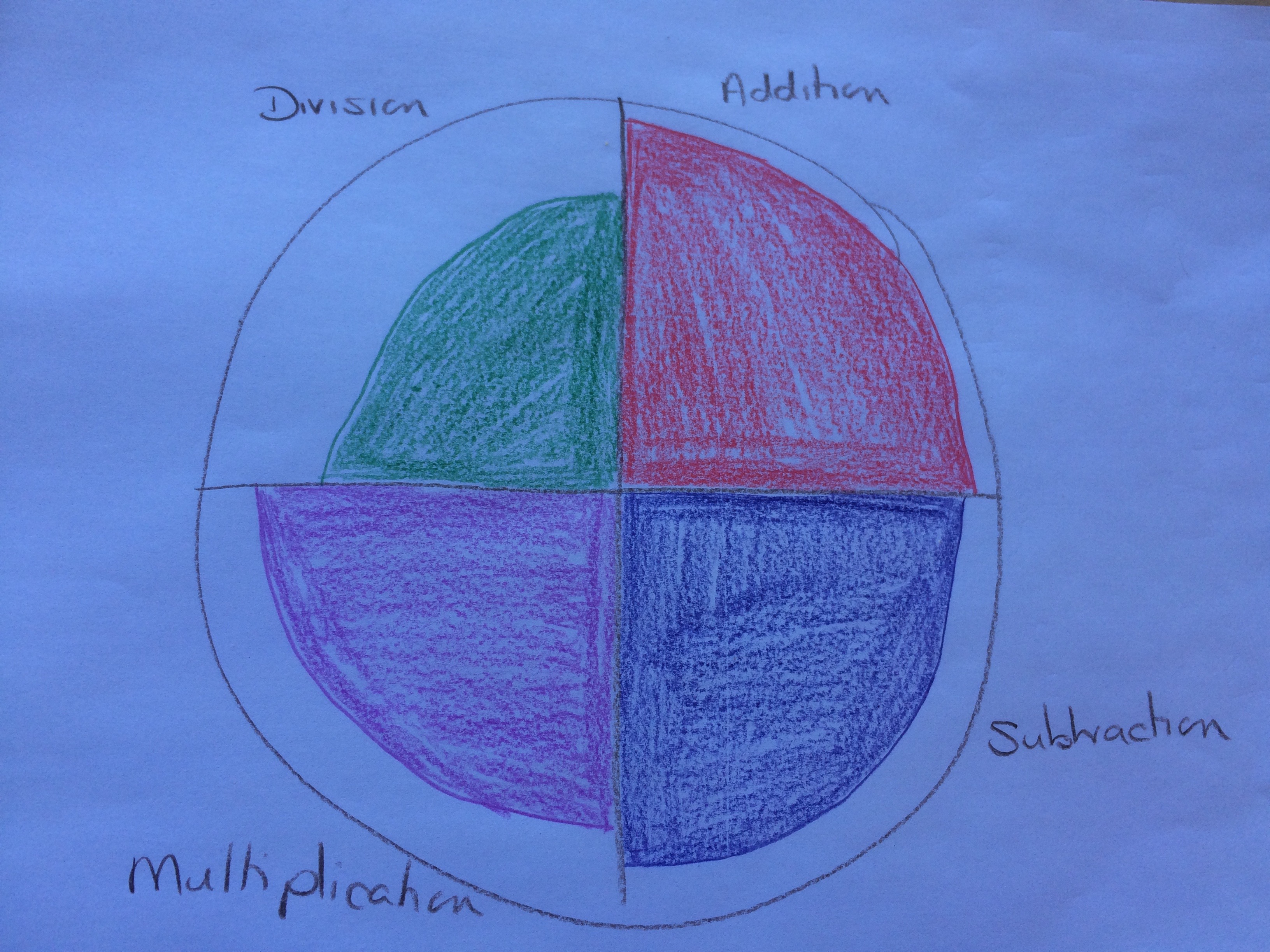 Now ask them what they notice.  If this is a graph to show how rubbish at maths they are, what does it say?  With any luck they will comment that there’s actually quite a lot coloured in.. if they don’t give them a bit of a nudge in that direction.  Also point out that there is one area that needs a little more work than the others but there is a lot of pie coloured in.  You’re comments of “no your not” are no longer needed as they’ve come to this conclusion in a very visual and colourful way.

Just as a side note… guess what picture they’re going to have in their head when they come to do their maths test!! 😉